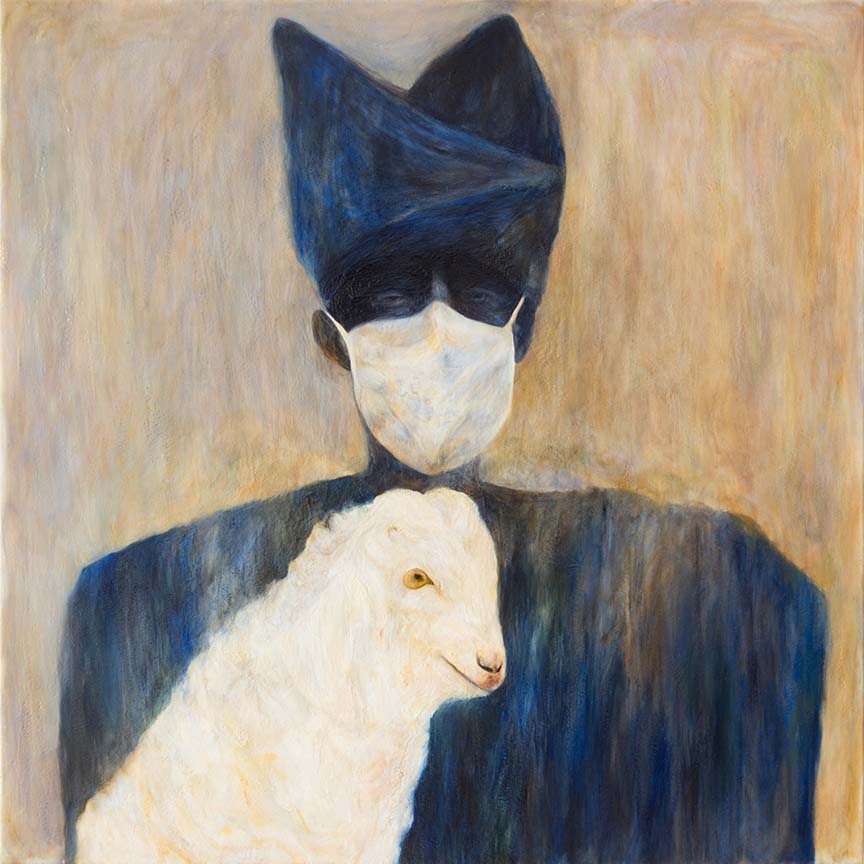 Woman with Goat and Surgical Mask by Kharis Kennedy depicts an imposing, draped figure whose face is mostly hidden that brings to mind Madonna and Child, as well as iconography associated with purity and disease. Kennedy paints in contrasting light and dark colors to encourage the viewer to contemplate on what we instinctively reveal, or in the case of this painting, conceals.

The artist Adam Krueger and fashion designer Tableaux Vivants have teamed up to create wearable works of art. Their mask Take Out. Stay In. Lock Down explores the most intimate covering we all have – our skin – to investigate the physical and psychic barriers one creates to hide the vulnerable true self from the outside world. The mask was created from sewn together pieces of silicone tattooed with take-out menu imagery evocative of the comfort and security of staying in at night. The mask’s eye-slits that are opened and closed with zippers, bring to mind tools of sensory deprivation.

The installation Computer1, Untitled 1 & 2 by Victoria Manganiello & Julian Goldman elegantly embodies the history of the computer, from the automated loom through the use of the traditional skill of weaving, to today’s sophisticated technology as seen in the computer programmed dye patterns moving across the fabric through the clear tubes. Like the Luddites of the 19th century who destroyed the automated loom in fear that it would replace them, the concerns that automation and computerisation will render jobs obsolete persists today. This work examines how computers have also become analogous with textile’s universal symbolic intimacy and protection. Manganiello opines “we are born into a swaddle and we die with a burial shroud.”

For her painting Xenia, Qinza Najm uses a Persian-style rug as her canvas to represent traditional domestic life throughout the Middle East. Painted in acrylic upon this backdrop is an elongated woman who appears to be stretching against the gossamer fabric that envelops her, exemplifying women’s struggle to attain empowerment and to participate in contemporary life and simultaneously fulfilling ingrained cultural expectations. The diaphanous veil itself is reminiscent of the hijab, the traditional head covering worn by some Islamic women, and an Arabic word that can be literally translated as ‘veil’ or ‘barrier.”

Cheryl R. Riley’s works Transcendence Preserved: Shovel I and Transcendence Preserved: Singer Sewing Machine I explore ideas of identity and the impulse of preservation through these antique yet once quotidian objects reminiscent of her family history, which she encases in custom vinyl slipcovers. Her works are nostalgic in part because of familiar object inside yet also because of its covering that conjure memories of inhospitable living rooms furnished with plastic covered couches and objects not meant to be touched. Conversely, Riley’s applies gold paint where human hands would have touched the objects in their original use as functional tools, elevating the ordinary objects to sacred status.

This exhibition presents three printed sculptures by Ashley Zelinskie. These unique artworks titled: Android 3, Android 4 and AI Skull were created through 3D printing, with the binary code of the shape or DNA sequence of the subject being the very surface of the work in order to create objects that both humans and computers can understand. Although Zelinskie’s work contemplates the possibility of singularity with reverence and fascination the disquieting memento mori-like skull and cyborg imagery hint at the prospects for humans that the future may hold.

To inquire about artworks and pricing, further information, or to schedule a private viewing, contact Julian Lorber (Director), at 1518-225-6429 or by email at info@barneysavage.com.