Join us on Saturday, June 10th from 4-6pm for the closing reception of Hearts and Bones. 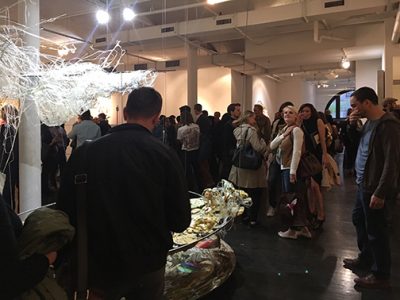 Hearts and Bones, ART100’s spring exhibition, proudly presents two artists who fully occupy their work with vital presence and vision. Judy Pfaff is one of America’s most celebrated innovators of installation art and an ongoing force in the redefinition of the medium of drawing. Kharis Kennedy is a gifted and deeply expressive painter whose 6 years living in the Caribbean have added a vein of dark spirituality to her exploration of values surrounding fashion, the nature of the self, and what the body knows. 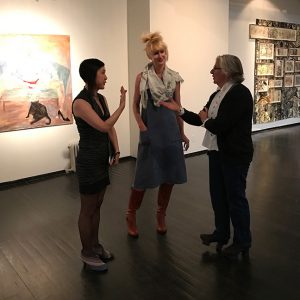 Hearts and Bones, a two person exhibition viewing the works of Kharis Kennedy and Judy Pfaff. 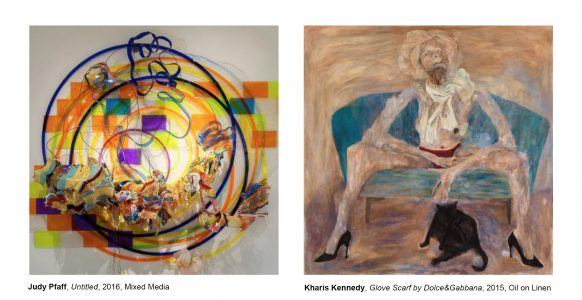 Hearts and Bones, ART100’s spring exhibition, proudly presents two artists who fully occupy their work with vital presence and vision. Judy Pfaff is one of America’s most celebrated innovators of installation art and an ongoing force in the redefinition of the medium of drawing. Kharis Kennedy is a gifted and deeply expressive painter whose 6 years living in the Caribbean have added a vein of dark spirituality to her exploration of values surrounding fashion, the nature of the self, and what the body knows.

Since the 1970’s, Judy Pfaff has been creating vigorous, sprawling dynamic two and three-dimensional art. Pfaff’s work has been called “cosmic,” seemingly without beginning or end, where order and chaos tussle and embrace. Her taste for the visual world is omnivorous – things organic, architectural, geographic, astronomical, sacred and symbolic surface and intertwine in her installations and drawings. For ART100 Gallery, Pfaff reconfigures her immersive installation piece Turtle, a harmonic swirl of plexiglass, tree stumps, airline cable, LEDs, resin, tape, foam and digital prints. And she is creating a new series of mixed media drawings. Among her many honors, Pfaff is the recipient of MacArthur and American Academy of Arts and Sciences Fellowships. Her work has been featured in three Whitney Biennials; it is in the permanent collection of the Museum of Modern Art and those of numerous other institutions. She continues to expand her mastery of line and space with these gestural, multi-layered drawings which are imbued with new visual vocabularies illuminated by Pfaff’s restless spirit of exploration.

Kharis Kennedy approaches objects and the body as sites of knowledge, repositories of awareness that can be resourced in the service of personal discovery. Her painting explores values and identity, gender, race, and power through images of fashion, wealth, status and self-indulgence. During her six years residing in the Caribbean, she says, these concerns have been inflected by a “dark spirituality” which was new and unexpected. Kennedy’s Fixed Value series sets the measurable: light, weight, and energy — the physical elements of painting –against the un-measurable: the works’ emotional evocativeness. Touch Has A Memory is an on-going series of life-scale paintings, a dialogue between images of strong, self-possessed women and their spirit creatures. Rendered in contrasting light and dark colors, these converging images reveal the hybrid and complex nature of the self, encouraging us to reflect on what is covered and that which remains hidden. The title of the series quotes from John Keats’ poem, What Can I do to Drive Away, and alludes to the idea that the body is a source of knowledge about ourselves, our histories, and the world. 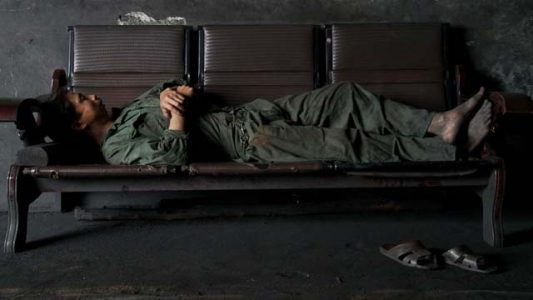 In the 1891 Project Space, Shanghai artist Li Xiaofei constructs an installation featuring videos created over the last several years — four pieces from the remarkable Assembly Line series, and recent videos A Cart of Coals, A Packet of Salt, and Chongming Island.

Li Xiaofei is interested in “all kinds of truth;” what he calls “the paradox between truth and reality” pervades his video work. Li’s Assembly Line series has received global recognition since it was begun in 2011. He shoots, seemingly without judgment or inflection, the constant, repetitive, mechanical reality of factory work. And his worker interviews, interspersed at unexpected junctures with these images, tell of resignation, boredom and unfulfilled desires. Yet, these oddly touching videos are not particularly about how work dehumanizes. Factories and assembly lines are, after all, purely human creations, and Li says, “I found the relationship between human and machine…strange and complicated…the factories I shot are brimming with a surprising collective romanticism.” A Cart of Coals is rooted in Li’s early life in Hunan Province. Members of his family worked in the mines, and through his family, he has stayed abreast of how his mining town and the people in it have developed and changed. Salt, a condiment rather than a necessity, plays an unremarkable role in most lives, except those of the workers for whom reality, as evidenced in A Packet of Salt, is producing and transporting it. Chongming Island, Li says, is about people and consumption. Like many of his generation, Li recalls that his father was loath to part with any item that was still useful. Today, it seems, we are loath to hold on.

Judy Pfaff was born in London, England, in 1946. She received a BFA from Washington University, Saint Louis (1971), and an MFA from Yale University (1973). Her many awards include: Academy Member Fellowship, American Academy of Arts & Sciences (2013); Anonymous Was A Woman Award (2013); MacArthur Fellowship (2004); Guggenheim Fellowship (1983); National Endowment for the Arts grants (1979, 1986); member, American Academy of Arts and Letters. Her work has been featured in numerous solo exhibitions and group shows in major galleries and museums in the United States and abroad. Commissions include Pennsylvania Convention Center Public Arts Projects, Philadelphia; large-scale site-specific sculpture, GTE Corporation, Irving, Texas; installation: vernacular abstraction, Wacoal, Tokyo, Japan; and set design, Brooklyn Academy of Music. Her work is in the permanent collections of the Museum of Modern Art; the Whitney Museum of American Art; the Brooklyn Museum of Art; the Detroit Institute of Arts; and others. Pfaff co-directs the Studio Art Program at Bard College, where she was named Milton Avery Distinguished Professor of Art.

Kharis Kennedy was born in California in 1976. She received her BFA in Painting and Drawing as well as a BA in Art History from the University of Washington (Seattle). In 2008, Kennedy was the recipient of the A.I.R. Gallery Fellowship. Kennedy lives and works in St. Croix in the U.S. Virgin Islands. Solo exhibitions of Kennedy’s work have appeared in New York, Seattle and St Croix, US Virgin Islands. Recent group exhibitions have been staged at Trestle and Life on Mars Galleries in New York. Kennedy also participated with a solo exhibition and performances at Take Five – A Survey of A Survey of Race, Identity, Gender and Power at the Caribbean Museum Center for the Arts in the US Virgin Islands.

ART100 Gallery is a project of Bai Jia Lake International Group based in China. The gallery occupies a 3,000 square foot ground floor space in a historic 1891 building on the corner of 25th Street and 11th Avenue. Bai Jia Lake International Group supports events and institutions that provide opportunities for cultural exchange through visual art. ART100 New York is affiliated with the Group’s galleries in Beijing, Shanghai, Singapore, and Hong Kong. The gallery presents the work of renowned Chinese and other international contemporary artists, and provides a platform for those who are emerging and distinctive.